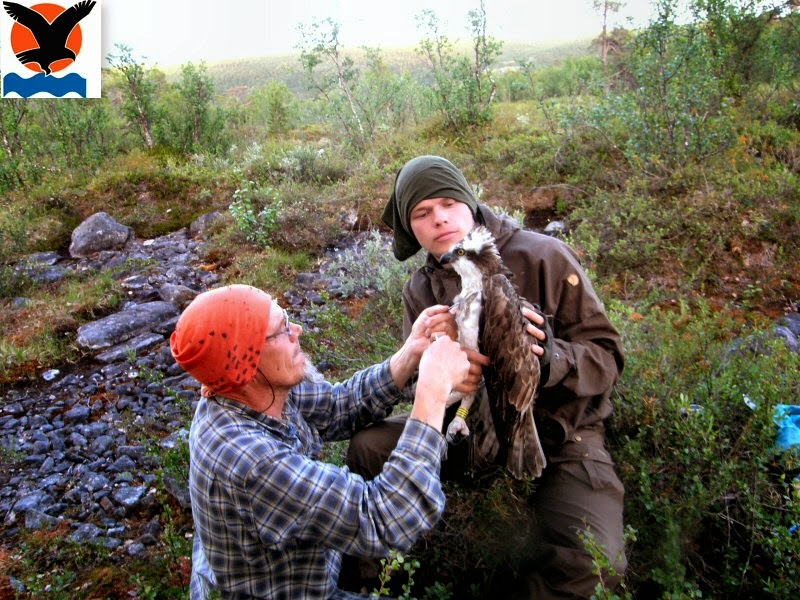 
On the 11th October, the competitors in the 2014/15 Volvo Ocean Race departed Alicante on the first leg of their 70,000km round-the world voyage. They left the Mediterranean and, three days later as they were heading down the coast of Morocco, the wind was directly behind them. This was no good at all, and something had to be done.

The class of sailing boats being used – the Volvo Ocean 65 – is no luxury cruising yacht. They are cramped, noisy, uncomfortable, wet, overpowered and undermanned – and ridiculously fast. Despite being over 20m long, the VO65 weighs less than 13 tonnes. It is constructed from carbon fibre and other lightweight composite materials. The sails are not made from sewn cloth panels in the traditional way: instead, they are vacuum formed from high-modulus fabrics such as Kevlar on an enormous mould that creates an aerodynamic profile, like the wing of a bird.

Migrating ospreys are in a kind of race, too. However, the rules for their contest have been set by Evolution and the winners are those birds who complete the set distance – not in the shortest time, but with the least expenditure of energy. In order to do this, migrant birds seem to have a number of strategies that they can choose from, depending on the conditions encountered along their routes. And one of these methods is very similar to a technique developed by the helmsmen of modern high-performance racing craft:-

No sailing vessel can progress directly into the wind. Instead, they must steer a zig-zag course at angles of about 30 degrees to the wind direction, making several “tacks” - or changes of direction – to reach a given point. Sailing directly AWAY from the wind is much easier but, for these racing machines, it is very inefficient because the boat can actually sail faster than the wind which propels it. The crews have worked out that they can achieve a lower point-to-point elapsed time (the velocity made good, or “VMG” for short) by sailing at maximum speed, again at an angle to the wind. They cover a greater distance, but the overall time taken taken to do so is improved.

Millions of years ago, migratory birds discovered the same trick BUT, instead of optimising speed (VMG), they adapt to the conditions and achieve maximum distance per unit of energy expended. Unlike the yachtsmen, birds find that a crosswind has a BAD effect on their flight efficiency, and this is for two reasons: firstly because they have to make constant small course corrections to stay on track, and secondly because the airflow over their wings is disrupted, resulting in excess drag due to turbulence.

In autumn 2014, an adult female osprey named “Seija” was fitted with a GSM satellite tracker by researchers in northern Finland.[1] She migrated strongly down through Europe, crossed the Adriatic near the “heel” of Italy and skipped over the widest part of the Mediterranean in a single 14-hour hop. Rather than resting, Seija continued southwards during the next day before coming to roost at the edge of the Lybian desert. She had flown 5300 km in only thirty days.

Next morning, Seija was up and flying early and within three days had reached the border between Algeria and Niger. How was she managing to cover these distances, across the wind? The chart below shows the details of one hour's flying time, and illustrates that these adult ospreys from Finland know a thing or two about crossing deserts...

So what is going on here? The figures in white are altitude (in metres) at each track point where there is a major direction change, and the points themselves are registered at intervals of about 80 seconds. There is no cloud cover. The land surface is about 600m and comprises flat stony desert terrain, with some low-growing scrub vegetation in patches. There are no large-scale thermals here, because the area is dominated by stable high pressure. However, small columns of rising air form locally in the surface layer, and these can be very numerous as the terrain is heated unevenly by direct sunlight. 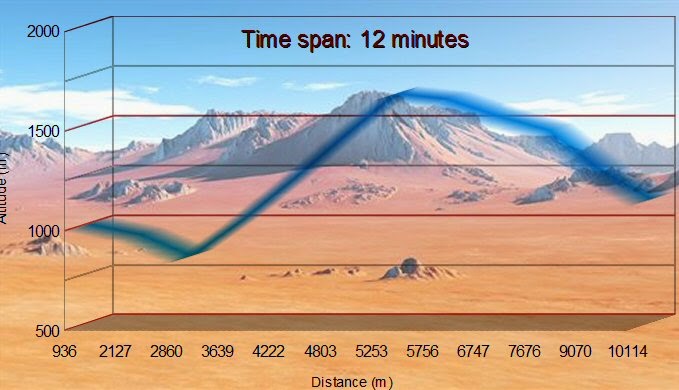 Each time Seija encounters one of these, she turns downwind and uses it to gain height. Her rate of climb is around 200 metres per minute – probably achieved with little or no extra effort AND without wasting time on “classical” spiral soaring. Seija simply flies in the up-current while it lasts. As soon as she reaches the limit of the column, she turns back on her proper course, flying easily with occasional wing-flaps – not gliding, but gradually losing altitude to increase speed and conserve energy. Clever Seija is experienced at this migration stuff and she knows that her path will soon cross another up-current, where she can repeat the trick.

Adding up the figures for this part of her journey, I find that Seija had covered a much larger aggregate distance than a direct start-to-finish route, but in much the same time as she would have done without employing this technique. Meanwhile, back on the ocean, the VOR sailors had achieved overall average speeds of 8.7 knots in a wind that rarely blew over 10 knots.

I bet they had to work a lot harder than Seija did.


So... does all this mean that ospreys never use soaring flight in thermals during migration? No, it doesn't – and in the next part of this article, we will take a look at a different bird in a different part of the desert, some other variants of long-distance bird flight, and see how an osprey's wing-shape is perfectly adapted for these purposes.

Wildlifewriter acknowledges the use of tracking data supplied by the Natural History Museum of Finland (Luonnontieteellinen Keskusmuseo) and the Finnish Osprey Foundation.

Posted by Wildlifewriter at 12:38 No comments: