The breeding habits of the European osprey have been well documented over the years but, until comparatively recently, much less was known about their lifestyle at winter quarters.

A combination of satellite tracking, high-visibility rings, and diligent fieldwork from many sources has increased our understanding of this seasonal behaviour, but much remains to be discovered.

In the last ten years, bird tracking devices have used on-board GPS sensors in preference to the much-less accurate doppler VHF system. This has allowed us to observe specific movements during both day and night, and some patterns have started to emerge...

It had always been thought that ospreys were mainly sedentary during the winter season, keeping to a small activity area and seldom if ever leaving it until the time for spring migration. But the higher levels of detail now available has shown that this simplistic picture is not quite right. Many ospreys - and especially those that forage along exposed beaches and river systems - leave their hunting areas for the evening and roost overnight at favourite spots further inland, often in the same tree each night. Only where there are coastal or riparian “forests” (such as mature mangrove) do they tend to remain in place.

The reasons for this behaviour are not difficult to deduce: beaches may be warm and sunny during the day but chillier at night. Vegetation tends to be low and sparse, so predation risk would be higher. Evenings along river margins are when biting insects become most active.

Many tracked ospreys, including “Ceulan” (Blue 3C in 2012) have returned tracking info that demonstrates this transference to off-area roosting. As I studied their various data files over the years, I kept asking myself the same question: why is this bird flying five, ten, even twenty kilometres to THIS roosting tree? It must have flown past hundreds of other suitable trees to get there – so what's so special about this particular roost? 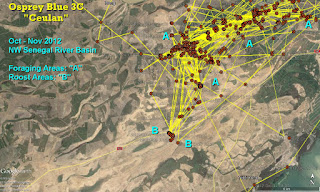 When Joanna Dailey, Pip Rowe and Vic Paine visited NW Senegal [1] in February 2016, I encouraged them to pay special attention to the roost site(s) of osprey Blue UV – a 2014 osprey from Kielder Water in Northumberland. This bird was carrying a “second generation” GSM tracking device, so we knew exactly where he was sleeping and were getting regular updates each day on his diurnal movements. (I was under no illusions about what I was asking of them: night falls very quickly at latitude 16ºN, and the west African bush is no place for newly-arrived white folks to go wandering around in the dark.)

Nonetheless, the group DID manage to observe UV at his habitual roost site – and he wasn't the only osprey using it! On successive mornings, they were able to see several birds leave the area and fly westwards towards the fish-rich Langue de Barbarie coastal strip. It was exactly what I had hoped they would find.
Later, Dirk Vanhoecke (director of the Tougoupeul Project)[2], confirmed in conversation with JD that his study group regularly see numbers of ospreys - six or seven, typically - roosting together in the wooded hinterland areas of NW Senegal. In this specific case, UV appeared to be totally relaxed in the company of other ospreys: was seen preening at perch and flying with them in the early mornings. The roost was also occupied by other species, including red-billed hornbills T. erythrorhynchus kempii.

Although large birds of prey do not form daytime flocks, communal or semi-communal winter roosting has been observed in species such as Bonelli's Eagle[3] and Montague's Harrier. In recent years, migratory lesser kestrel roosts of over to 20,000 individuals have been found in west Africa [4]. The survival benefits of communal roosting suggest that ospreys should have evolved similar behaviour and, as their overall population numbers slowly recover, we are beginning to see evidence that this is so.

My thanks to Vic Paine and JD for permission to use original photographs in this article.