“Why don't ospreys migrate together as a family unit?” It has almost assumed the status of Frequently Asked Question, and the answer is simple...
It's because they're ospreys...

Some other species of birds, for example geese and wild swans, do exactly this: they travel from their breeding sites in family groups, with the adults escorting their offspring to the wintering grounds, hundreds or even thousands of miles distant. Without this guidance, the fledglings would never know where to go. But in evolutionary terms, the logistics of this have a very specific result: in a given population and after only a few generations, all the birds end up wintering in the same place! For grazing birds, this is a perfect survival strategy. They assemble in a huge flock, food is not a problem, (grass doesn't run away or hide) and there is safety in numbers with many eyes watching for danger. 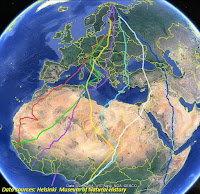 But for ospreys and other species that hunt a limited resource, this system won't do at all. They are apex predators, not flocking geese...

A thousand ospreys arriving on a single African lake would exploit the local fish supply at an unsustainable rate. To solve this problem, evolution has arranged matters so that young ospreys have to find their own way in Autumn. They are born with all the navigational instincts needed to do this, but built into those same instincts is sufficient positional uncertainty to ensure that the young birds are dispersed over a wide wintering area.

This random end-point factor (referred to by scientists as a “stochastic element”) is one of the hidden secrets of osprey migration and is instrumental in forming many aspects of their post-juvenile behaviour.. It has evolved because a general dispersal in winter quarters gives the incoming youngsters a slightly better chance of survival as individuals.

But where does this "randomness" in the selection of a final destination come from?  That's a whole other story and really needs an article all of its own.

Posted by Wildlifewriter at 06:17 5 comments:

... reckless behaviour affecting the conservation of a Schedule 1 protected species

During the Pacific campaigns of World War II, native peoples on many small islands (now generally called Melanesia) came into contact with the products of Japanese, and then Western, technological culture for the first time. Aircraft and ships brought stockpiles of military support supplies – tinned food, construction material, tents and clothing - to the islands, which the inhabitants referred to as “Cargo” - the pidgin word for trade goods. Then, as mysteriously as they had arrived, the service personnel accompanying this logistic effort vanished again, as the fortune of war ebbed and flowed across the region.

The islanders weren't stupid. They knew the value of the goods, but their own culture had no terms of reference to explain how or why all this stuff had been produced and delivered. The Ancestral Spirits had obviously meant the Cargo for them – and if some had arrived, there must be more on the way...

They had observed the baffling rituals performed by the visitors, rituals which preceded the arrival of Cargo. Soldiers marched up and down on the beaches. Others lit fires in straight parallel lines, and then spoke while wearing curious headdresses connected to grey boxes. The islanders reasoned, logically, that if they performed these same rituals correctly, more Cargo would be sent to them.  THAT was how the world of the Spirits had always operated, was it not? 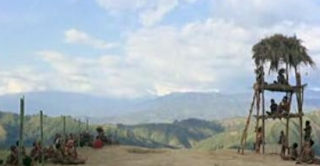 So they marched up and down. They built “control towers” from bamboo, and carved wooden headphones to use in them. They lit the landing fires, and waited... But, far away, WWII had ended and the aeroplanes never returned. These strange versions of religion persisted in the South Pacific for many years, and anthropologists coined a general term for them..

In certain areas of Wales, and also in the Scottish borders, some misguided people have been running around the countryside, putting up platform poles for “osprey nests”. The rationale behind this seems plain enough: in the past, ospreys have nested on artificial platforms, therefore many more platforms means many more ospreys will come. Simple, innit?

Except that it's not that simple at all. 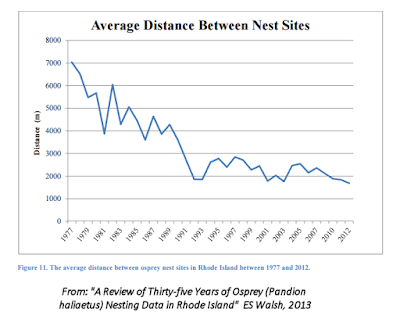 We now know that population, dispersal, and nesting dynamics in a recovering osprey population are complicated and have a pattern of development that must be taken into account by any responsible conservation plan. Low population density in a given area means that male birds defend very large nesting territories. Young birds returning to these areas disperse widely, often having to cover hundreds of kilometres in their search for a mate and a nest.

As (and if) the recovery proceeds normally, defended territories become gradually smaller, pre-nuptial dispersal covers shorter ranges, and more local nest sites are taken up. BUT it can take several generations of birds for these changes to happen, and ill-considered attempts to manipulate them cause problems: polygynous nesting being only one of these.

These hobbyist platform-builders do not understand the underlying processes in a recovering osprey population. But unlike the rather smarter south-sea islanders, they seem to have little or no interest in finding out the real facts, preferring just to perform their Ritual of Poles repeatedly in the superstitious hope that ospreys will magically appear.

The only things missing are the wooden headphones.

Posted by Wildlifewriter at 16:54 No comments:

Judging the onset of migration

“The time is out of joint—O cursèd spite,
That ever I was born to set it right!
Nay, come, let's go together. “
Hamlet I,v

As we approach the end of January, it might seem as if the time of Spring migration is still a long way off – but in fact, things are already changing for our birds down in Africa...

Long-distance migration is no trivial matter. A bird cannot just one day decide “It's probably time that I was heading back to my summer nest. Better get moving.” Before THAT happens, birds must make physical preparations and some of these preparations can take many weeks. In some species, feathers must have been moulted and new ones grown out. And in almost all species, substantial reserves of body fat have to be laid down as fuel for the coming journey.

And then there's the matter of timing.
It's been known for centuries that migratory birds use changes in the length of day (“photoperiod”) as one primary factor in knowing when to migrate. The biological mechanisms of how this works are complicated, and links to further reading are given below. We now know that animals have internal “clocks” that keep track of time over various periods, from daily rhythms to the cycle of the whole year. These timers are moderated by external factors including photoperiod, changes in temperature, and even (in some cases) location-specific alterations in the flux of Earth's magnetic field.
In west Africa, the ospreys are already measuring changes in the day length and the accuracy with which they have to do this is rather surprising.

Here in northern Europe, even we humans can notice that we have now passed the Winter solstice and the days are growing longer again.

At a latitude of 54.5ºN (where this author lives) each day is three minutes longer than the previous one (19th Jan 2017) and the rate of this change is increasing by about three to four seconds every day.

But nearer the equator - where our birds are still consulting their ease in the Senegal sunshine - the changes in day length are much less obvious. At 15ºN, each day is only 30 seconds longer, and rate increase is less than one second per day.

This rate-of-change variable seems to be very important to migratory birds. After all, some of them (swallows, for example) are wintering south of the equator – where the days are still getting shorter.

These changes are tracked by photoreceptors deep in a part of the brain called the hypothalamus. The exact details of what happens during this process are not fully understood, but it appears that some kind of phase-comparison is being made between the amount of light being detected, and the “position” of the bird's internal circadian clock. We suspect this because if either mechanism is interfered with, the bird will no longer be able to evaluate photoperiod changes correctly.

But, however it all works, the fact is that the faraway birds are already making their preparations to return for the coming summer.

(Thanks to Chris Wood for the use of original photographs)