In the previous article in this series, we looked at one of the energy-saving flight modifications used by ospreys and other raptors during their migrations. Like human glider pilots, ospreys have developed a whole range of techniques that can be used - either singly or in combination – to gain maximum advantage from the prevailing conditions.

Using data from the latest GSM-type tracking units, which can log flight parameters at intervals of minutes - rather than hours, as was typical of the older UHF devices – we can get a much clearer view of what these birds are doing and how they are doing it... 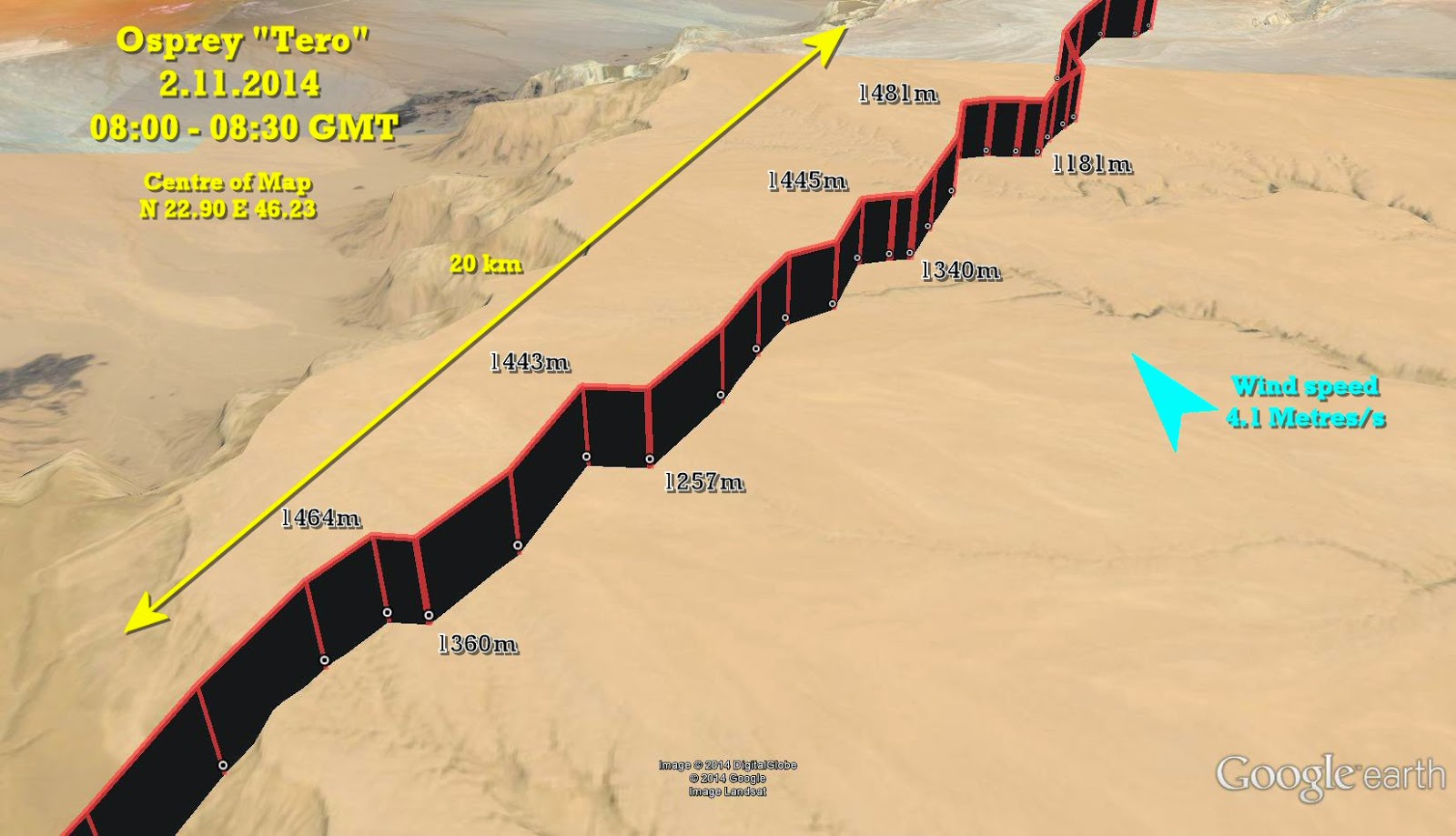 In November 2014, adult male osprey “Tero” was flying south-west down the Arabian Peninsula. After a major diversion to avoid adverse weather south of Iraq, he had reached the Jabal Tuwayq - a long north-south escarpment that marks the eastern boundary of the Asir Highlands in Saudi Arabia. The winds were light but slightly against him. But Tero was able to use the overall rising air current caused by the gentle terrain gradient in a method known to pilots as “slope soaring” 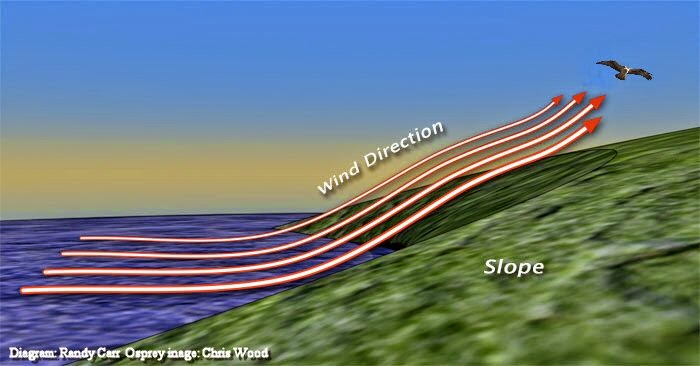 As with the “crosswind tacking” technique, this allowed him to gain altitude by turning UP the slope, and then maintain course progress by flying down it at a shallower angle. The advantage of this system is that it works for almost any wind direction that is at a greater angle to the line of slope than 30 degrees.

A variant of this flight mode is what I've chosen to call “ridge riding”. It is an adaptation to more complex upland terrain where there are many changes of elevation, with steep-sided river valleys and hill crests. And the example chosen this time features “Blue 7H” - a female first-time migrant from nest #2 at Kielder Forest. Blue 7H provides the possible answer to a question that came up on one of the discussion groups, which (in summary) was:

“Do juvenile birds have the innate (instinctive) ability to use these energy-saving techniques, or do they have to learn them as adults?”


Only seven days after leaving her natal nest, 7H had reached the Galicia region of northwest Spain. Crossing this mountainous and forested landscape, she took advantage of local up-currents along the windward side of ridges to maintain the necessary height and made good progress southward and into Portugal. It seems like even a young bird of prey comes equipped with the full repertoire of flight, and only needs to add a modicum of practice. This confirms visual observations of other migratory species on their first migrations.

In the final part of this series, we will look at some other flight modes that are used by ospreys, and see how their anatomy and wing layout influences what they are able to do.

Wildlifewriter acknowledges the use of tracking data supplied by the Natural History Museum of Finland (Luonnontieteellinen Keskusmuseo)and the Finnish Osprey Foundation, and data and images by Forestry Commission England.

A Goldfish for Birgit

If I could, I would travel to Senegal, find “Birgit” the osprey, and hand her a halibut in person. And not just any halibut, but a halibut made of solid gold and inlaid with semi-precious stones. 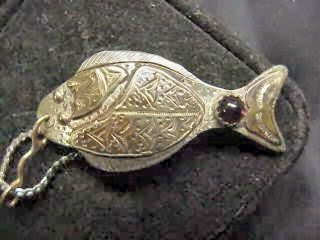 Which she probably wouldn't like.
I don't actually have the money or the time (or indeed, a golden halibut) for such an extravagant gesture but the reward would not be unfitting. Not since the time of Ceulan himself has there been such an osprey for the getting of knowledge – and the stories of these two remarkable young birds intersect in a way that could not have fallen out better if I had dared to script it myself...

There are many scientific theories about how long-distance migratory birds achieve their point-to-point navigation. The current wisdom (such as it is) involves a synthesis of various sensory contributions and, over the years, several studies have suggested that birds can “see” the Earth's magnetic field in order to orient themselves. The results have been mixed (to say the least!) and often non-repeatable – which, in Science, is generally A Bad Thing. 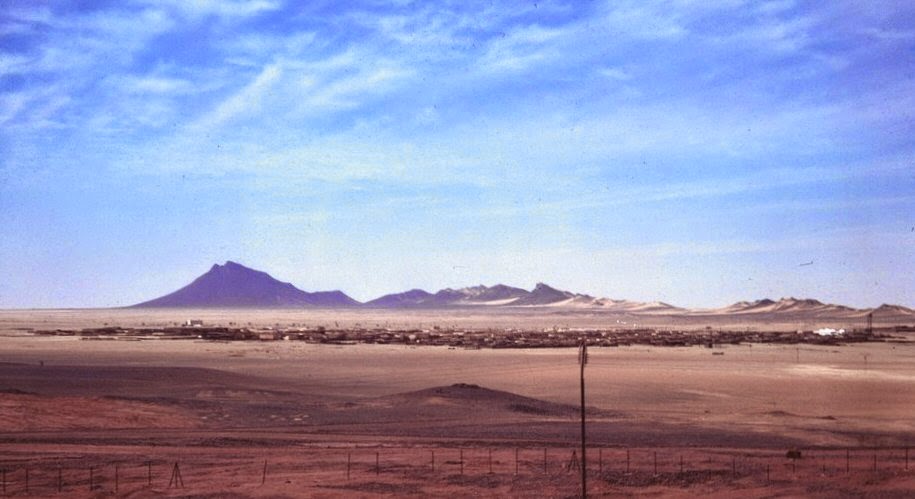 The proponents of magnetic navigation have had to take their idea through several iterations: originally it was proposed that birds – and other animals – had some kind of “built-in compass” that told them which way was North. This ran into trouble quite quickly, when experiments showed that animals have no concept of “North” as a specific direction. The next version was that these creatures were obtaining positional information from lines of magnetic force. Unfortunately, this doesn't work very well either: in many places on its surface, the Earth's magnetic field lines lie parallel to each other, which would make them useless for point location.

To get round this problem, the next modification was that animals could sense the “inclination” of field lines – sometime referred to a the “dip angle” which changes with both latitude and longitude. This is certainly feasible (in theory) but even us humans need extremely sophisticated and accurate instruments to measure the dip variation - which is very small – and there was no known sensory apparatus in birds that would be capable of doing this. Meanwhile, researchers who actually know something about birds were studying data from tracking experiments and ring recoveries.[1] In Sweden, an important study looked for the characteristic direction shift that would be evidence of such a navigational mechanism. They did not find it.

The magnetophiles did not give up. Microscopic particles of iron oxide were found in birds' beaks, in the their eyes, their brains, and even in their feet! Weird quantum-mechanical effects were invoked [2] although with a convenient disregard for the actual laws of Quantum Physics. Some experiments were done which were so creative that no animals were involved in them at all. The debate continues and the jury is still out on this stuff.

So – at least as far as ospreys and other raptors are concerned – where does the evidence lie? Is this whole “magnetic navigation” thing the genuine banana, or just a load of haphazard hornswoggle? Can't the birds themselves help us out with this?


When Ceulan made his epic migration in September 2012 he passed right over the Kediet al Jill – a 500m-high “guelb” or outcrop hill of magnetite iron ore in eastern Mauritania. This place is one of the most prominent and highly-localised magnetic anomalies anywhere on Earth so if Ceulan's navigational sense was ever going to be visibly affected by anything, this is the place where it would happen. 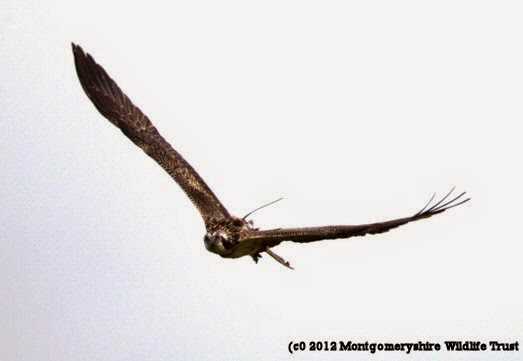 His course did not deviate by any appreciable amount. But THAT was only one example – until last week, when Birgit came to the same place. (4.11.2014) Not content with a simple pass-by demonstration, she roosted for the night on the north-west slope of the mountain itself. And in the morning, the time when all ospreys take their bearings and direction for the coming day's flight, she simply took off and headed straight towards her eventual wintering site in northern Senegal.

If ospreys really did use field lines as a primary navigation method, both of these birds would have been flying in circles around the Kediet until they got far enough away from it.  But there is no sign that it had any effect on their navigation whatsoever.

Wildlifewriter acknowledges the use of tracking data supplied by Montgomeryshire Wildlife Trust, the Natural History Museum of Finland (Luonnontieteellinen Keskusmuseo) and the Finnish Osprey Foundation.