We had last heard from Aln (Blue 7L) on the 7th of November 2017, when her unusual, weather-dominated migration route through Holland and Germany via the Swiss border with France and through eastern Spain, appeared to have ended in the foothills of Morocco's Atlas mountains.

For days we waited, and then weeks. Hope faded – other sub-adult ospreys had vanished from the tracking charts at this point in their journey. But then...

In late December of that year, we received a fragment of data, indicating that Aln was alive and wintering somewhere in northern Mauritania. This “somewhere” was obviously out of range from the GSM cell towers that carry our communications, and only when she wandered away from it could we expect to hear more news.

So we waited. Eventually, in April 2019, Aln embarked on her return migration. As her transmitter struggled to upload the mass of data it had accumulated during the previous 18 months we began to fill in the picture of where Aln had been, and what she had been doing. We don't have all of it, and probably never will, but here – in the context of one selected day – is part of Aln's story...

Stars still litter the sky but there is light enough to fly. Sunrise may be be a couple of hours away but already the eastern horizon is a narrow glaring band, like molten silver. Aln's favoured roost sites are among the sand dunes of the desert interior. At night, these locations are away from the chilly onshore breezes of the coastal margin, and the scattered rocks store warmth from the previous day. But she cannot be here when the sun rises and temperatures start to soar. She heads west towards the nearest of several tidal lagoons, four kilometres away. 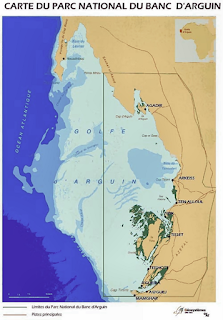 This is the Banc d'Arguin National Park in Mauritania. It is a World Heritage site and protected under the Ramsar treaty as a location of international importance for biodiversity. By any standards, Aln has chosen a remote and isolated location: there are no people here, no roads, no fishing villages – even the Park staff, based at the southern part of the reserve, face an arduous cross-country expedition of more than 300 km just to get here. It's an ephemeral terrain of tidal channels, quicksands and ever-shifting dunes – because this “land” really belongs to the Sea.

06:27 – 07:20 UTC Aln arrives at the lagoon and waits there. The tide - now rising - has not yet reached this far inland and the shallow water carries a thin film of dust that has fallen during the night. The margins of the pool show a white crust of evaporated salt. Although there are small fish here, it would be hard for her to see them.

It is the exact hour of sunrise. Although Aln is not conscious of it, the sun's appearance feeds important information to the autonomous centres of her brain: her internal “clock” registers that this daybreak is slightly later than the one before, and the one before that. Her innate navigational sense is also recalibrated by the time difference, confirming that she knows exactly where she is. 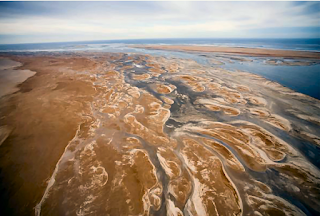 08:39 UTC Aln flies west again another 6.5 km, crossing the southern lagoon to a rocky promontory on the coast. From this vantage point she views the area, taking in the activity of other birds and assessing the state of the tide. It is still too early for fishing, as seawater floods into the lagoons through a wide breach in the dune margin. After a few minutes she takes wing again, moving north along the shoreline...

Other birds... There are many thousands here, in dozens of different species – but far fewer than when Aln first arrived. The Gulf of Arguin is a unique and vital location for migrating wildlife - one of the most productive marine environments anywhere on the planet. 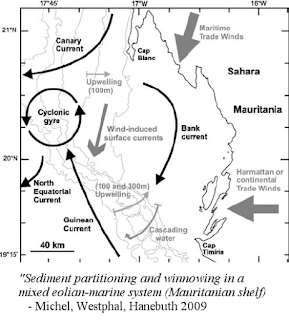 Cold-water currents carry organic nutrients up and over the edge of the African continental shelf. Meanwhile, dust and sand blows onto the water surface from the desert interior, bearing minerals such as phosphates and nitrates. Fuelled by sunlight and fertilized from above AND below, life explodes into action.

Microscopic plants - the phytoplankton – multiply at such a rate that their biomass is visible from space. They form the basis of a complex food web that attracts all manner of marine creatures. Some - like the rare and endangered Atlantic right whales - travel thousands of kilometres to join the feast.

09:07 UTC  Aln arrives beside the wide and shallow flood channel that feeds the northern lagoon, It is one of her routine fishing spots, but she does not hunt as ospreys do in other places, on the wing. There is no need. Instead, she stands on the side of a half-submerged sandbar and watches for the fish as they struggle past in a few inches of water. She is joined by a host of other piscivorous birds – all taking advantage of this unusual situation...

The fish have been betrayed. Normally a rising tide would provide deepening water to protect them from the predators along the channel, but here this seems to be happening far too slowly. While the tide attempts to flood the land, the evaporative power of the desert sun is lifting eighteen metric tons of water out of the lagoon EVERY MINUTE. 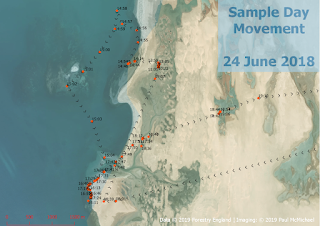 13:59 UTC   Her hunger satisfied for the moment, Aln moves off to the beach where it should be cooler. She perches on some sand bars along the foreshore but it is still too hot for comfort. After a while, she takes off and flies out to sea.

We have observed other tracked ospreys doing the same thing. Flying is an extra way for large birds to regulate the their body temperature. Veins and arteries under the skin of their chests and flanks can be dilated, allowing the slipstream to cool their blood directly.

15:05 UTC   Aln has flown south 2.5km, arriving back at the cape where she was this morning. Tracking data shows that it is one of her favourite places – a rocky promontory that juts out into the sea. Here, in a comfortable sea breeze, she can chose from many safe perches that overlook the gulf. In front of her, migrating dolphins race past, leaping and spinning clear of the water. 16 different species of dolphin and porpoise have been identified at Arguin – a record for the west African coast.

17.28 UTC    “What do wintering ospreys do all day?” From tracking and many field observations, the answer seems to be – as little as possible for as long as possible. Aln has remained at her vantage point for the last two hours. This is not idleness – it is an exercise in inactivity and the object is to conserve as much energy as possible.

We have analysed Aln/7L's flying speeds over the available recorded period and found that they are much lower than those typically seen on migration. It appears that wintering ospreys are in no hurry to do anything, and this fits in with the whole pattern of instinctive energy management.

19:40 UTC   Aln has arrived back at her roost site just as the sun is setting. With minor variations, this will be her daily routine for another ten months, until the time comes for her to return northwards. By that time, she will have finished growing her new set of adult feathers and will look very different in appearance. 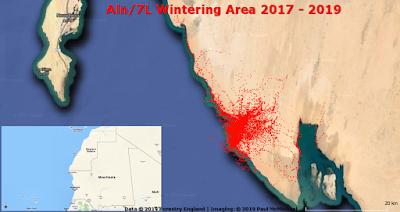 She has made her wintering location work for her. To our human eyes, the Arguin coast of Mauritania might look like a harsh and desolate landscape – but it seems to be a good place for ospreys.