Here in the UK, recreational angling is big business. In England, angling was estimated to have put £STG 1.4bn into the local economy. (2018 figures)  As a proportion of regional GDP, the amounts for Scotland, Wales and Northern Ireland respectively are probably even higher than that. And as the man said: 1.4 billion here, 1.4 billion there – pretty soon you're talking real money. [1]

Angling Clubs, and the vast majority of their members, share our love of the countryside and the wild creatures who live there. But predatory birds will still be predators and occasionally this can lead to some understandable friction between anglers and conservation groups. “We can't catch any fish in this lake because the ospreys (or cormorants, herons, grebes, etc) have eaten them all!” It seems like a fair complaint, but is it true?

When a young female osprey, Blue 7L (Kielder N2, 2017) made her first return migration this year (2019), she arrived back in Northumberland on the 25th May, took one look at our horrible spring weather, and headed south again the following day. Of course, as a non-breeding bird, 7L is free to wander wherever she chooses and – after roaming around the south-east of England for a while – she eventually settled in an area of Sussex; about 50km south of London.

We were following 7L's detailed movements using GPS tracking. And what she did in the month that followed provided us with some very significant information. 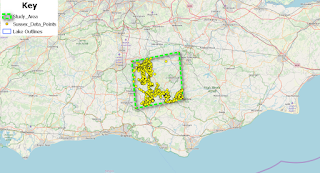 But first, a question: why was 7L down in the Weald of Sussex at all? It's not a place where ospreys nest, although they are sometimes reported there on passage. The countryside is wooded and rural but with many large towns, and the busy area around Gatwick international airport is close by.

The answer is, of course, that she was there to eat. Having just completed a long and arduous migration (for the conditions in 2019 were far from helpful to northbound migrant birds), 7L's first priority would be to feed up and recover physical condition. Perhaps the absence of other ospreys competing for resources was a plus point for her. This part of Sussex features a couple of significant river systems, reservoirs large and small, and - most importantly for our study – there are many small lakes and ponds, often on private land and most (if not all) containing fish.

Sussex may not be popular with ospreys but it's well supplied with angling clubs and venues for them. 7L soon found one of the best of these – a series of stocked fishponds with a large wooded area close at hand for roosting. It is identified as “Site 13” in our study.

This single location could have supplied all the food that a lone female osprey could possibly need. All she had to do was stay there and collect a free meal as and when necessary. But THAT isn't what happened... 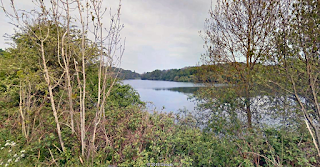 Over the next 30 days, 7L explored the whole area, seeking out every body of water - large or (preferably) small, she could locate.  Following her GPS path, we had to locate them too – no simple task as several were not even marked on our larger-scale maps!  Over the following weeks she visited these places multiple times, flying a total of 486 km during the period.

Using the QGIS 3.8 geographical information system, I set up an analysis of these movements.  The system selected a number of location “visits” according to set criteria which, after some experimentation, seemed to match the behaviour of a foraging bird. (It was not sufficient for 7L to have just flown over a given lake on her way to somewhere else.)  You can find a detailed description of how this was done in the technical paper linked at the end of this article. [2] 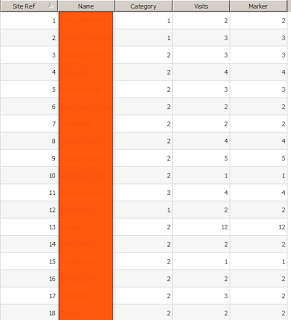 In all, 18 locations were selected and the total number of visits recorded for each. Although “Site 13” remained her favourite and she often returned there, it was certainly NOT her only resource for food.  With a maximum distance between sites of some 20km, we conclude that these are not random movements, but rather that they demonstrate a structured (and probably highly-optimized) foraging strategy.

Examination of  inter-site flight paths supports something that we have always known about ospreys – they remember every single foraging location and, once fixed in the context of local landmarks, can fly back there by direct point-to-point routing – even in poor weather conditions with restricted visibility.

We found that 7L showed a clear preference for smaller lakes and ponds.   By contrast, the largest body of water in the area, Weir Wood Reservoir (a notable coarse angling venue), does not appear in our data table at all.  She overflew it once, did not stop there, and never visited it again. 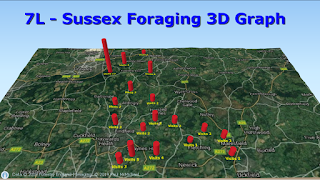 Evolutionary Theory suggests that species such as ospreys should avoid exploiting a single food source, IF more than one such source is available. Computer modelling of predator-prey simulations  also indicate that this ought to be true.  BUT... obtaining confirmation of that behaviour in the wild is much more difficult than running a simulation.  There are many extra variables – and the notorious English weather is only one of them.

During her sojourn in Sussex, and thanks to high-resolution GPS tracking, 7L enabled us to observe  her foraging behaviour in detail, and the results speak for themselves.  Although some sites were favoured above others, ALL of them contributed to her overall food supply requirement and we suggest that the hypothesis is thereby proved...

Ospreys do not over-exploit a single fishing location if other resources are available. In fact, they adopt an innate strategy which avoids doing this.

Ospreys are a protected species under current UK environmental legislation.[3]  They are sensitive to disturbance at all stages of their life cycle – including “well intentioned” disturbances by hobbyist photographers or over-enthusiastic birders. In cognizance of that, we implement a policy of withholding certain information in documents such as this.

Since 7L is still active, and it is possible (even likely) that she may return to the study area in future seasons, we have removed specific references to named locations and held back or modified maps that may describe movements and roosting / foraging sites in too much detail.  We hope that the reader will appreciate the necessity for this.